We aim to enable comparative trait analyses that are powered by computational inferences and machine reasoning based on the meanings of trait descriptions. Similar to how Google, IBM Watson, and others have enabled developers of smartphone apps to incorporate, with only a few lines of code, complex machine-learning and artificial intelligence capabilities such as sentiment analysis, we will demonstrate how easy access to knowledge computing opens up new opportunities for analysis, tools, and research. We will do this by addressing three long-standing limitations in comparative studies of trait evolution: recombining trait data, modeling trait evolution, and generating testable hypotheses for the drivers of trait adaptation.

The millions of species that inhabit our planet all have distinct biological traits that enable them to successfully compete in or adapt to their ecological niches. Determining how these traits evolved is thus fundamental to understanding earth’s biodiversity, and to predicting how it might change in the future in response to changes in ecosystems. While a sophisticated ecosystem of analytical methods and tools exist for analyzing traits comparatively, these models tend to make unrealistic assumptions and/or become increasingly complex and unwieldy as phenotypic datasets enter the era of big data. Applying the full power of these models to the myriad of trait observations available (which are often recorded in the form of natural language descriptions) requires that machine-reasoning tools are integrated into both data acquisition and analysis. By using domain knowledge of the definitions and interdependencies of phenotypic traits, we can enable a new era of trait evolutionary analyses that break free of the constraints of previous approaches and connect across genetic, model organism and evolutionary datasets.

The technological arsenal needed to overcome this challenge is now in principle available, thanks to a number of recent breakthroughs in the areas of knowledge representation and machine reasoning, but these technologies are challenging enough to deploy, orchestrate, and use that the barriers to effectively exploit them remains far too high for most tools.

We will create a centralized computational infrastructure that affords comparative analysis tools the ability to compute with morphological knowledge through scalable online application programming interfaces (APIs), enabling developers of comparative analysis tools, and therefore their users, to tap into machine reasoning-powered capabilities and data with machine-actionable semantics. By shifting all the heavy-lifting to this infrastructure, tools can programmatically obtain answers to knowledge-based questions that would otherwise require careful study by a human expert, such as objectively and reproducibly assessing the relatedness, independence, and distinctness of characters and character states, with only a few lines of code. To accomplish this, the project will adapt key products and know-how developed by the Phenoscape project, including an integrative knowledgebase of ontology-linked phenotype data (the Phenoscape KB), metrics for quantifying the semantic similarity of phenotype descriptions, and algorithms for synthesizing morphological data from published trait descriptions. 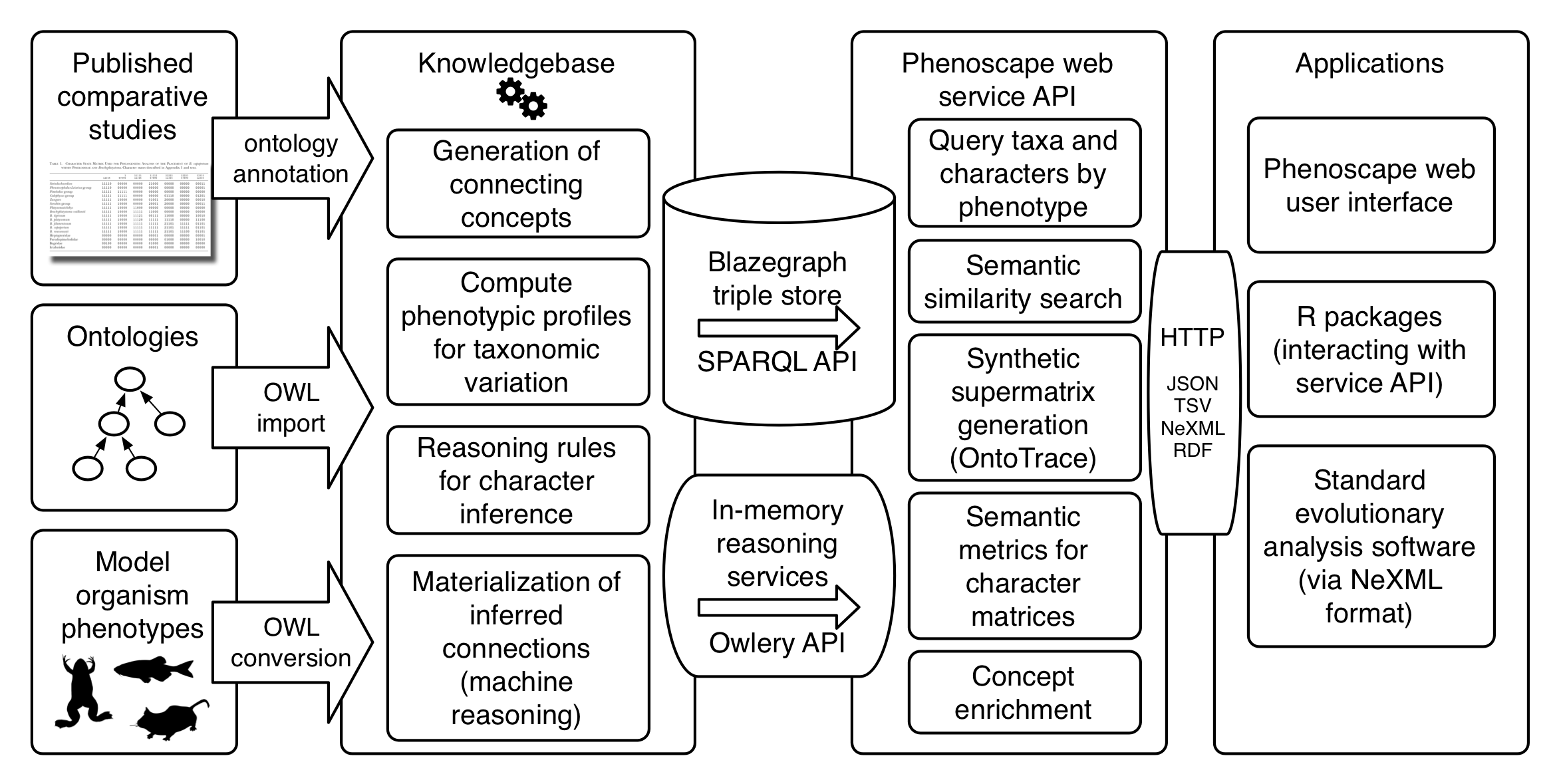 To drive development of the computational infrastructure and to demonstrate its enabling value, the project’s objectives focus on addressing three concrete long-standing needs for which the difficulty of computing with domain knowledge is the major impediment:

In addition, to better prepare evolutionary biologist users and developers of comparative analysis tools for adopting these new capabilities, a domain-tailored short-course on requisite knowledge representation and computational inference technologies will be developed and taught.

The team includes PIs and co-PIs at 4 institutions:

We are (or will soon be) actively recruiting undergraduate and graduate students as well as postdocs at different institutions:

The grant proposal text with references is publicly available: